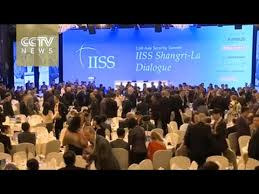 Asia’s largest annual security forum Shangri-La Dialogue was inaugurated in Singapore on 3 June 2016. It is the 15th Asia Security Summit to openly discuss and debate security matters in the Asia-Pacific region.
•    It is expected that the 2016 discussions will be dominated by the issues like territorial disputes in the South China Sea, military provocations of North Korea and Islamist extremism, migration, counter terrorism, military competition and cyber security.
•    The Singaporean government along with British think tank the International Institute for Strategic Studies launched the Summit in 2002.
•    The forum is organized by the London-based International Institute for Strategic Studies (IISS).
•    The annual three-day summit became an unofficial conclave for regional defense ministers, along with European and US military officials.
•    The 2016 dialogue got its name from the location of the meeting, the Shangri-La hotel in Singapore.
•    The forum serves for military officials as a venue to meet behind closed doors.
•    The event will be attended by at least 20 Defence Ministers from Asia-Pacific countries which India’s Union Defence Minister Manohar Parrikar. It will be led by Pentagon chief Ashton Carter.
•    It provides opportunities to defence ministers, military chiefs and high-ranking defence officials to hold bilateral meetings on its sidelines.
•    The primary interest to delegates attending 2016 is China’s assertive activities in the South China Sea as it continues to gobble up islets and challenge the passage of US Navy ships and aircraft through the area.
•    The Legislators, academic experts, journalists and business delegates from around the globe will attend the dialogue.
•    The previous editions of the conference were marked by heated public exchanges between US and Chinese officials.