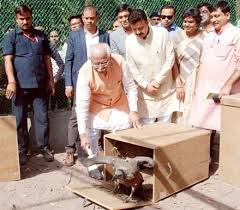 On 3 June 2016 The Haryana Government launched Asia's First Gyps Vulture Reintroduction Programme at Jatayu Conservation Breeding Centre, Pinjore.
•    Union Environment Minister Prakash Javadekar and Haryana Chief Minister Manohar Lal Khattar launched the program.
•    The Union Government became prominent vulture breeding and conservation centre in India after successfully breeding Himalayan Griffon Vultures.
•    It is the old world vulture in the family of Accipitridae-in captivity.
•    Many vultures disappeared due to Diclofenac which is a pain killer drug given to cattle that can kill birds.
•    When vultures feed on the carcasses of animals with Diclofenac, they also die.
•    At present, the drug is banned in India.
•    The Himalayan Griffon is closely related to the critically endangered resident Gyps species of vultures but is not endangered.