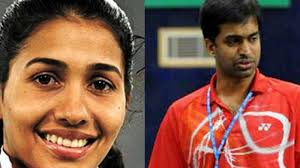 Anju Bobby George and Pullela Gopichand were named as the members of Khelo India on 26 June 2016. Khelo India is a national programme launched by the Union Government for the development of sports in the country.
•    George, India's lone athletics World Championship medal winner and Gopichand, the chief national badminton coach are the two sportsperson who were included in the seven-member committee of Khelo India.
•    The committee will be headed by Sports Secretary Rajiv Yadav.
•    Born 16 November 1973, Gopichand is a former Indian badminton player.
•    In 2001, he became the second Indian to win the all-England badminton champion. The first one was Prakash Padukone.
•    He has been the coach of the Indian national badminton team since 2006.
•    He runs the Gopichand Badminton Academy.
•    Awards felicitated on him include
•    He received the Arjuna Award in 1999
•    He received the Dronacharya Award in 2009
•    In 2014, he was conferred with the Padma Bhushan, India's third highest civilian award
•    Born on 19 April 1977, George is an Indian athlete.
•    On 22 June 2016, George resigned as the president of the Kerala Sports Council along with 13 other members.
•    She won the Gold medal at the IAAF World Athletics Final in 2005.
•    In 2005 World Athletics Final in Monte Carlo, she was upgraded to gold status from silver following the disqualification of Tatyana Kotova of Russia by the International Association of Athletics Federations.
•    She was awarded Arjuna Award in 2002.
•    She won the bronze medal clearing 6.49 m at the 2002 Commonwealth Games at Manchester.
•    She also won the gold medal at the Asian Games in Busan. In 2001, she also won gold for triple jump and long jump in the Ludhiana National games.
•    In 1999 she set the national record for triple jump in the Bangalore Federation Cup and Silver medal at the South Asian Federation Games in Nepal.