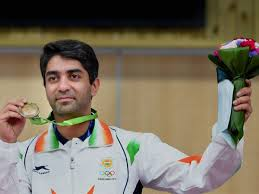 Olympic champion shooter Abhinav Bindra was on Friday chosen as the flag bearer of the Indian contingent at the Rio Games’ opening ceremony on 5 August 2016.
•    The Indian Olympic Association (IOA) confirmed that they have chosen the 2008 Beijing Olympic gold medalist as the country’s flag bearer for the quadrennial extravaganza.
•    Bindra will be making his fifth Olympic appearance this year.
•    Alongside star boxer Vijender Singh, tennis legend Leander Paes and decorated grappler Sushil Kumar, Bindra’s name was under consideration prior to the 2012 London Games too, before the IOA gave the honor to the double Olympic medalist wrestler.
•    He is till date India’s only individual gold medalist at the Olympics.
•    The usually reserved shooter achieved the feat when he clinched a historic gold in 10-metre air rifle event at the Beijing Games in 2008.
•    He is the Winner of numerous medals at top international competitions including World Championships, World Cups, Asian Games and Commonwealth Games.
•    He is also one of the goodwill ambassadors of the Indian contingent for the Rio Games .