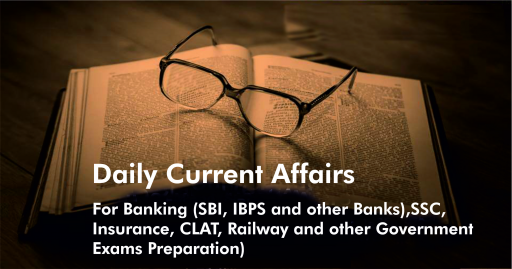 • According to the PSU Survey 2018-19, Oil and Natural Gas Corporation (ONGC), Indian Oil Corporation and NTPC were three the top profitable companies of India.

• The new district, carved out of Bilaspur, has three tehsils and three development blocks namely Gaurela, Pendra and Marwahi.

The World Health Organization on February 11, 2020 official renamed Coronavirus as ‘COVID-19’. So far, the deadly coronavirus has caused over 1000 deaths in China, which is more than the number of deaths caused by the SARs outbreak of 2003. Coronavirus originated in China; however, the virus has now spread in various countries. India has also reported 3 cases of Coronavirus from Kerala.

The Central Government recently announced to introduce new Re 1 currency note with security features. The all-new one rupee note will have several watermarks. The value of the currency note will be mentioned in 15 different Indian languages. The note will contain an image of ‘Sagar Samrat’, the oil exploration platform.

• Facebook launched its ‘We Think Digital’ programme, under which the social media giant will provide digital literacy training to 1 lakh women across seven states, including Uttar Pradesh, West Bengal and Bihar.

• In partnership with National Commission for Women (NCW) and Cyber Peace Foundation, the program aims to provide digital literacy training to one lakh women across seven states through the year. The programme will start with the state of Uttar Pradesh and expand to other states including Assam, West Bengal Madhya Pradesh, Gujarat, Jharkhand and Bihar, it added.

• Bengaluru-based IT services major Infosys stated it has signed a definitive agreement to acquire US-headquartered Simplus, a major Salesforce platinum partner, in a bid to strengthen its cloud business.

• The acquisition, expected to be complete within a month, will incur a cost of up to $250 million, Infosys said in a filing with stock exchanges.$200 million, including contingent consideration to be paid for the acquisition of shares, subject to closing adjustments.

• After resounding victory in Delhi assembly elections, Chief Minister Arvind Kejriwal will take oath for the third time on February 16.

• The swearing-in ceremony will take place at the historic Ramlila Maidan — similar to that of last two times.

• Italian super bike maker Ducati stated it has appointed Bipul Chandra as the new Managing Director of its India operations.

• Chandra replaces Sergi Canovas who is moving to an international role within the company.

India ranks 17th among countries at risk of coronavirus import

• Of the countries most at risk of importing coronavirus cases, India ranks 17th, researchers have found on the basis of a mathematical model for the expected global spread of the virus that originated in China’s Wuhan area in December 2019.

• The top 10 countries and regions at risk of importing coronavirus cases are: Thailand, Japan, South Korea, Hong Kong, Taiwan, USA, Vietnam, Malaysia, Singapore and Cambodia, according to the model.

• While Thailand’s national import risk is 2.1 per cent, it is 0.2 per cent for India, found the research.

• NPC was established in 1958. The autonomous organization functions under the Department for Promotion of Industry & Internal Trade (DPIIT), Ministry of Commerce and Industry.

International Day of Women and Girls in Science

• The United Nations General Assembly (UNGA) adopted a resolution A/RES/70/212 on December 2015, declaring Feb.11 as the International Day of Women & Girls in Science.

• Theme:“Investment in Women and Girls in Science for Inclusive Green Growth”.

• The World Unani Day is observed every year on February 11.

• Indian Army has recently developed the cheapest gunshot locator of the world ‘Parth’. This device has been developed by the Army's College of Military Engineering.

• A private firm also helped the Indian Army to develop this device. According to the media report, its cost is about Rs. 3 lakh. It will save a lot of money as imported device costs about Rs. 65 lakhs.

• The device ‘Parth’ was recently showcased at DefExp0 2020. Earlier, the Indian Army developed a bullet-proof helmet that can stop an AK-47 bullet.

•           With the launch of another 11-km stretch, Hyderabad Metro Rail has become the second-largest metro rail network in the country after Delhi.

•           This research and development centre focuses on the sustainable model for development in coal mining.

•           Under the Regional Connectivity Scheme “Ude Desh Ka Aam Nagrik (UDAN)” of Government of India, Ministry of Civil Aviation (MoCA) has operationalized the first ever helicopter services in the state of Uttarakhand.

•           Chief Minister of Uttar Pradesh has announced an internship scheme for the tenth, 12th and graduate students of the state to brighten employment prospects.

•           During the internship of a period of six months or a year, each participating youth will be given 2500 rupees as honorarium every month. Out of this, rupees 1500 will be given by the Central Government and 1000 rupees by the State Government.

• The theme of African Union Summit 2020 was ‘Silencing the Guns’. It has adopted the eight resolutions including ‘Agreement with United Nations for funding in peace operation’.

92nd Academy Awards, also known as Oscars 2020, announced. The awards were presented at a ceremony held at Dolby Theater in Los Angeles, USA. The film “Parasite” became the first foreign-language film ever to win the Best Picture award at Oscars 2020. Actor Brad Pitt won the Oscars for ‘Best Supporting Actor’ for his film 'Once Upon a Time in Hollywood'.

• Kamya Karthikeyan (12-year-old) from Mumbai has become the youngest girl to climb Mount Aconcagua, the highest mountain in South America.

• She studies in 7th grade at Navy Children School in Mumbai. She holds the record by climbing the highest mountain in the Andes mountain range as the youngest girl to climb this mountain.

• Kamya Karthikeyan trekked in various high altitude areas of the Himalayan region. She aims to complete "Explorers Grand Slam" by 2021.

•           The International team of astronomers led by scientists at the University of California, United States(US) have discovered an Ultramassive monster galaxy dubbed as XMM-2599.

•           Armand Duplantis, a 20-year-old Louisiana native who has been as shrewd in choosing the nation he represents as he has been in choosing his fiberglass poles, broke the world record in the pole vault on Saturday with a jump of 20 feet 2 ¾ inches, or 6.17 meters.

World Pulses Day proclaimed on February 10 of each year since 2019. World Pulses Day is a designated United Nations global event to recognize the importance of pulses (chickpeas, dry beans, lentils, dry peas and lupins among others) as a global food.