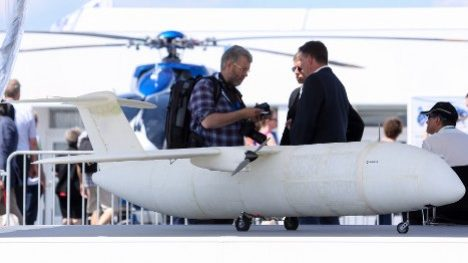 Airbus on 1 June 2016 displayed the world's first 3D-printed aircraft THOR at the International Aerospace Exhibition in Schoenefe.
The drone THOR is short for Test of High-tech Objectives in Reality and it resembles a large, white model airplane.
•    Is the world's first 3D-printed aircraft with just 3 parts.
•    It is windowless, weighs 21 kilo grams (46 pounds) and less than four metres (13 feet) long. It is Lighter, faster and cheaper.
•    Except the electrical elements, all other parts are printed (3D) from a substance called polyamide.
•    Thor's inaugural flight was conducted in November 2015 near the northern German city of Hamburg.
•    Airbus and Boeing are already using 3D printing, notably to make parts for their huge passenger jets the A350 and B787 Dreamliner.
•    The new 3D printers can make pieces up to 40 centimeters (15 inches) long and is of most use in particularly complex designs.
•    Apart from costs savings, 3D printing also promises ecological benefits as lighter jets use less fuel and spew out fewer pollutants.
•    It will be a radical technical innovation to reducing carbon emissions in aviation with air traffic expected to double in the next 20 years.