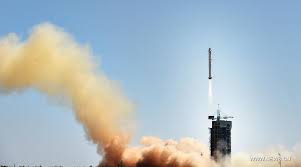 China used its latest green rocket design to carry 20 micro-satellites into space.The Long March–6 was successfully launched from the Taiyuan Satellite Launch Centre in north China’s Shanxi Province.While it won’t earn a Greenpeace sticker, the Long March–6 is about as environmentally friendly as rockets get. It is fuelled by a liquid propellant made of liquid oxygen and kerosene.

Boffins at the China Aerospace Science and Technology Corporation say it is the nation’s first rocket to use fuel that is pollution and toxin-free.The Long March–6 is a small carrier rocket. It will be mainly used to launch micro-satellites and to make China more competitive in the lucrative market for commercial satellite launches.China is largely secretive about its space programme, which is closely tied to the country’s military. It is less reticent about its scientific ambitions and its planned lunar mission.While the Long March–6 was popping out satellites, a larger Long March–5 rocket was making its way from the northern port of Tianjin ready for a rehearsal of the Chang’e–5 lunar mission scheduled for 2017.