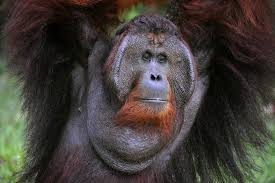 Bornean orangutan, a primate species has been declared critically endangered by the (IUCN).
•    The declaration is based on the assessment of Red List of Threatened Species.
•    IUCN assessment has found that population of Bornean orangutans has dropped by nearly two-third since the early 1970s.
•    It has projected that their population will further decline to 47,000 animals by 2025 representing population loss of 86%.
•    Bornean orangutan is a primate species native to the island of Borneo.
•    It is found only in the wild in Sumatra island of Indonesia and Borneo in the Malaysian states of Sarawak and Sabah and Kalimantan.
•    Together they belong to the only genus (Pongo) of great apes native to Asia.
•    Orangutans share 97% of their DNA with humans.
•    They are highly intelligent.
•    They display advanced tool use and distinct cultural patterns in the wild.
•    About 40% of Borneo’s forests lost since the early 1970s to plantation agriculture and it will continue.
•    In past four decades, about 2000 and 3,000 of Borneo’s orangutans were killed every year for their meat.
•    They are slow breeders and produce only one offspring every six to eight years on average.