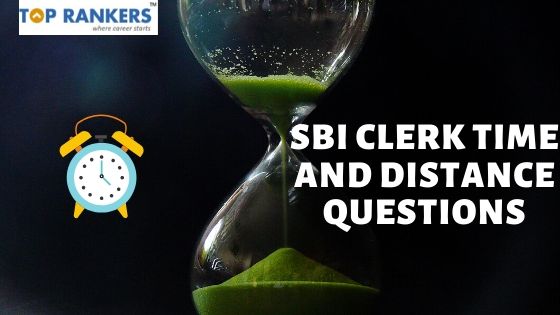 The topic of Time and Distance is one of the topics asked in the Quantitative Section of the Prelims and Mains Exam of SBI. The SBI Clerk Recruitment 2020 is for a total post of Junior Assistant with 8000 vacancies. Tips to solve SBI Clerk Time and Distance Questions for Prelim Exam 2020 can be checked down the post.

To make the concept pearl clear, we bring for you the detailed concept of Average Speed, Relative Speed, and Train and Platforms. All the probable questions are covered in the Example of various concepts for SBI Clerk Time and distance Questions by our experts.

Where x and y are the two speeds at which the same distance has been covered.

For n values    If the distance covered is constant (d1 = d2 = d3 = dn) in each part of the journey, then the average speed is the Harmonic Mean of the values.

Solution:  Since the distance traveled on both sides is the same, we can use the formula of the harmonic mean of speeds

So using this formula, we get the answer as  48 kmph.

Where, x and y are the two speeds at which we traveled for the same time.

For  n cases    If the time taken is constant (t1 = t2 = t3 = tn) in each part of the journey then the average speed is Arithmetic Mean of the values.

Solution: Here, the time for which Myra traveled at the two speeds is the same.

Case 1: Relative Speed of 2 bodies = Sum of their individual Speeds if they are moving in   the opposite direction

Example – Jethalal starts from Pune to Mumbai and at the same time Roshansingh Sodhi starts from Mumbai to Pune. Their speed is 25 kmph and 35 kmph respectively.   If the distance between Pune and Mumbai is 120 km.

Since they start together, the speed is 60kmph from the beginning.

From the answer1:  We know that Jetha and Sodhi will meet after two hours.
Since Jetha is riding from Pune side, in two hours he will cover

Relative Speed of 2 bodies = Difference of their individual Speeds if they are moving in the same direction.

Example –   Two athletes are running from the same place at the speed of 6  km/hr and 4 km/hr. Find the distance between them after 10 minutes if they move in the same direction.

When they move in same direction,

Still Water: If the speed of the water is zero, i.e. water is stationary, then it is called still water.

Stream: The moving water in the river is known as a stream.

Upstream: If a boat or a swimmer moves in the opposite direction of the stream, then it is called upstream.

Downstream: If a boat or a swimmer moves in the same direction of the stream, then it is called downstream.

When the speed of a boat or a swimmer is given, it usually means speed in still water.

Upstream Speed:  It is the speed of the boat against the stream = (u – v) km/hr

Downstream Speed:  It is the speed of the boat with the stream = (u + v) km/hr

If upstream is denoted as US and downstream as DS, then:

1. A man rows downstream 32 km and 14km upstream. If he takes 6 hours to cover each  distance, then the velocity (in kmph) of the current is:

2. In one hour, a boat goes 11km along the stream and 5km against the stream. What is the speed of the boat in still water (in km/hr)?

Solution:   Let x and y be the upstream and downstream speed respectively.

4)     A boat running upstream takes 8 hours 48 minutes to cover a certain distance, while it takes 4 hours to cover the same distance running downstream. What is the ratio between the speed of the boat and the speed of the water current respectively?

Solution: Let the man’s rate upstream be x kmph and that downstream be y kmph.