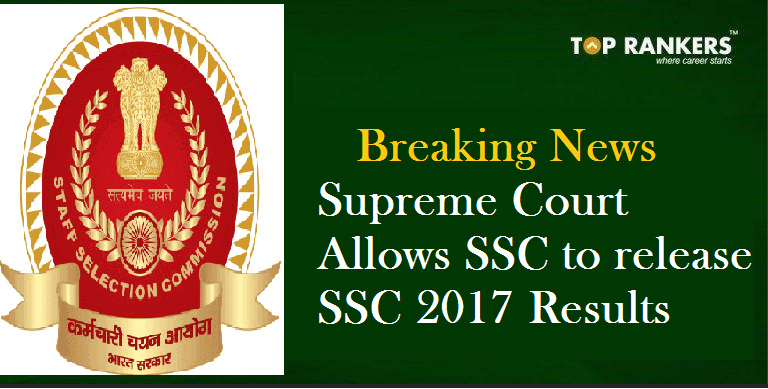 SSC Scam Update (8th May 2019):- Supreme Court allows SSC to declare SSC CGL 2017 result along with other SSC exams whose result were on hold.

Supreme Court of India allows SSC to declare results for the various SSC Exams whose result was on hold due to Scam probe in early 2018.
Though the dates of declaration of SSC result is not yet declared, SSC will soon update about the date of result for SSC CGL and other exams.

According to the latest hearing on SSC 2017 Scam, Supreme Court has sounded to be in favor of cancelling the SSC 2017 Exam. The SC states that it is not possible to catch all of the offenders who got benefited by the paper leak pf exam conducted on February. Hence cancellation of the exam is the best possible way out for a fair chance to all.  Supreme court has also asked the centre’s response on this matter. Important to Note that this is not the Final Verdict. The next date of hearing is 13th November 2018. You can find the Times Of India official tweeter handle announcement on the matter given below: 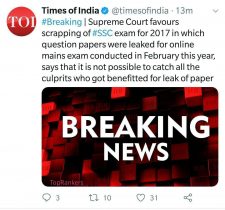 The honorable Supreme Court has announced a notice regarding the pre-pone of the next date of hearing for SSC CGL and CHSL 2017 scam. Previously, it was stated that the next hearing shall be on 22nd of November, but now it has been preponed to 12th of October 2018. We hope for a quick resolve of the issue such that the SSC CGL 2018 processes may be carry forwarded.

The Supreme Court has stated that the entire SSC examination system is not clear and corrupt-free. The next date of hearing is on 22nd November 2018, according to sources.

In a major revelation by Supreme Court today, it has passed its judgment against declaration of the Combined Graduate Level Test and Combined Higher Secondary Level Test. According to sources, the case was registered way back and upon perusal of the stated report dated 25.7.2018 and 30.8.2018, the Supreme Court has restricted SSC to release the results of the SSC CGL and CHSL 2017 results until further notice. Candidates are in a state of dismay and we have to wait and see what steps does SSC and the Supreme court takes next.

Check out the Notice issued by the Supreme Court below The mastermind of SSC Scam was caught from a market in Munirka, New Delhi. According to sources from Times of India the kingpin of the scam was Vinay Kumar Singh, who hails from Chapra, Bihar. The Special Operation Group or SOG was in-charge of preventing candidates from adopting any kind of inappropriate means in the competitive exam. Singh and his group were operating in Jaipur and Delhi and used to take hefty amount of money from aspirants in exchange of their service.

According to sources, Singh, who was an engineering graduate, promised to arrange impersonators for candidates appearing for the SSC exam on 15th July. He also arranged devices which would evade biometric fingerprint identification thereby allowing dummy student to fill in for the original applicants. He and his gang of 3 others (Pramod Kumar, Avnish Singh and Chetram Mina) were busted in Delhi by the SOG. Deputy Inspector General(DIG) Sanjay Shrotriya said that he used to arrange for impersonators for multiple competitive exams. This was an excellent achievement by the Delhi and Rajasthan Police and now the hard working students can breathe an air of relief as the cheating scandal was exposed.

CBI has filed First Information Report against SSC for criminal conspiracy, cheating, criminal misconduct by the public servants, cheating by impersonation using computer resource. Several individuals have been named in the FIR. As of now, no officials of SSC have been named in the FIR. Complaint has been filed against Suspected Candidates appeared in SSC CGL 2017 Examination Respective employees of SIFY’ Unknown Official/Officers of SSC and other unknown persons.

Crime Branch of Delhi Police has arrested Harpal Singh Chakara, a Delhi Government official, for the SSC Paper leak incident. He is suspected to be the mastermind behind the whole case. The arrest has been made on Saturday. For more than 1 month, he was on the run since the racket was busted. Till now, the police have arrested 11 people for this issue. According to the report, he used to charge Rs. 1.5 to 2 lac for providing solved papers on their computer.

The protests of the candidates have grown louder in New Delhi against Exam malpractice in SSC. SSC has become a tainted exam where every session of exam has a cheating case adding to the woes of the lakhs of students who take the exam. Like the old proverb, one bad apple spoils the whole bunch.

Toprankers has started an online petition to request the government to take action against various irregularities and scams that SSC has continuously been a victim of. The online petition is to take the grievances of SSC students to the PMO. Several students are demanding a SIT probe or CBI investigation into the various cheating cases that have happened recently. Students and SSC aspirants have invested their time and money to crack SSC. Biased favoritism and corruption must stop.

SSC Tier I and Tier II exams have brought tears to the eyes of students making them feel deceived. Students suspect that this is an SSC Scam that needs to be looked into. Cheating and Malpractice in SSC Exams is especially rampant in the northern states of UP, Bihar, MP where students are suffering as a result. Let’s look at some cheating incidents that are highlighted here.

The SSC CGL 2016 was held in June 2016 and the complete merit list was declared on August 5th 2017 after the rounds of several court cases. Several candidates who have been placed in various government departments still wait for their jobs despite being part of the merit list. These students have cleared all exams.

On Feb 22, Candidates taking the Staff Selection Commission (SSC) CHSL online exam in Bhopal created a ruckus at an exam center at Hoshangabad Road, Bhopal, Madhya Pradesh alleging that the paper was leaked and later staged a protest when the exam was canceled. The candidates found out that several questions were already marked with answers. Candidates protested giving a reason that this was an irregularity in the paper. The problem occurred with the first paper which was of mathematics. The authorities at the exam center informed the students that this technical glitch had happened across the country.

With lakhs of protesters clamouring for justice it is clear that SSC CLG Mains 2018 must be scrapped & rescheduled. A CBI inquiry into the leak is imperative. Our nation cannot afford to shake the faith of our students in the competitive examination system. pic.twitter.com/N9sR5b41l2

Screenshots of several papers appeared in the internet. In the page of SSC Tube, it alleged that some candidates might have taken the test from remote locations. Since any digital objects like mobile phones, cameras, pens etc are not allowed inside the exam hall it was conferred that the candidate named Sachin Chauhan could have taken the test from a Remote location. This is only a possibility and it is not officially confirmed by the authorities. SSC denied any foul play in the examination stating that the images appearing in social media have no bearing whatsoever on the rules. It termed the social media post as being manipulated.

A Facebook page called SSC tube claimed to have received images of answer keys from students of SSC. SSCTube urged others to come forward if they saw questions and answers being circulated before the exams.

Bihar SSC chairman and Senior IAS Officer Sudhir Kumar were arrested by SIT in connection with the paper leak. The SIT or Special Investigation team had concrete evidence that he played a role in the paper leak. Four other people including two of the nephews, brother, and sister-in-law of Sudhir Kumar were also arrested. The Exams that were to start before February 5, 2018, found their papers leaked online

Some Serious Irregularities In SSC Exams The Must Be Investigated. Govt Must Act On It🙏🇮🇳#SSCExamScam #SSCScam #SSC

Media reports suggested that a money to the amount of Rs. 2-5 lakhs was collected for BSSC exam for clerical grade jobs.

Several Candidates are dissatisfied with the performance of the Staff Selection Commission and the lengthy recruitment process that goes on for a long time. The SSC Recruitment process is fraught with several imperfections like frequent postponement of exams, cancellations, technical glitches, paper leakages, delay in appointment of candidates despite selection. In the wake of several such incidents, the students are extremely annoyed and unhappy. Students want an independent investigation agency to look into the malpractices that have happened recently.

SSC Scam : Demands from Students are as follows :-