SSC Normalization of Marks: Staff Selection Commission has announced calculation of scores for SSC MTS, CGL, CHSL, JE and all other exams conducted by SSC, through a normalized method. This update was introduced in PDF format on the official website of SSC on February 07, 2019.

Latest News: SSC has released the scorecards for SSC CGL Tier 1 Exam. Check the scorecards below and know an increase or decrease in scores after normalization. SSC released the SSC CGL Tier 1 Result on 1st July. Candidates qualifying above the SSC CGL Cut Off Marks are eligible for Tier 2. Along with the results, cut off marks has also been released.

SSC has concluded to calculate the marks of any candidate appearing for SSC CGL through normalized score calculation. CGL exam is conducted in multiple shifts, thus, keeping in mind the difficulty level of each shift, SSC has introduced this change.

Here are few candidates scorecard showing the raw scores and normalized score. Check the scorecards to know how the marks changes after normalization. 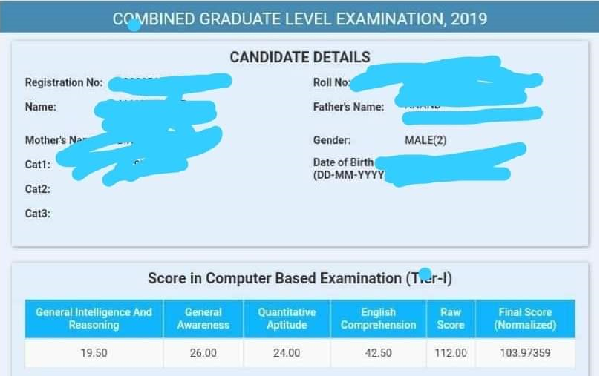 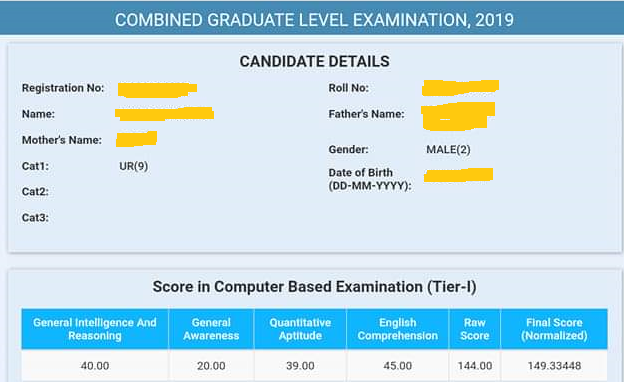 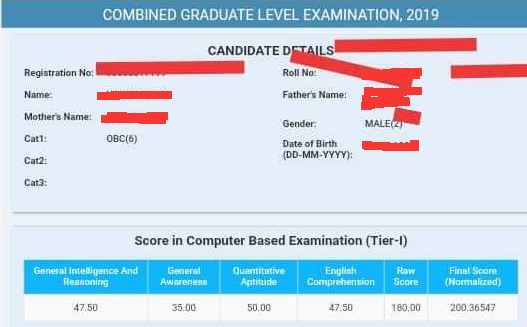 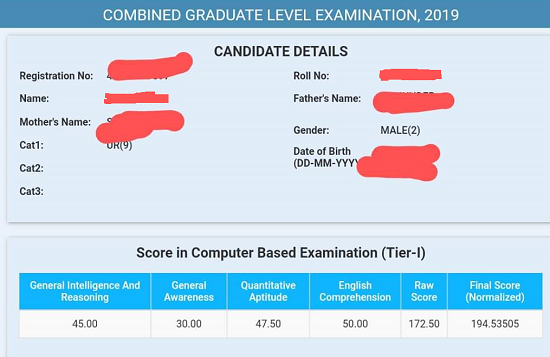 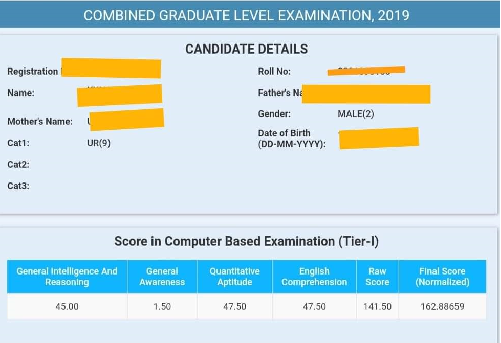 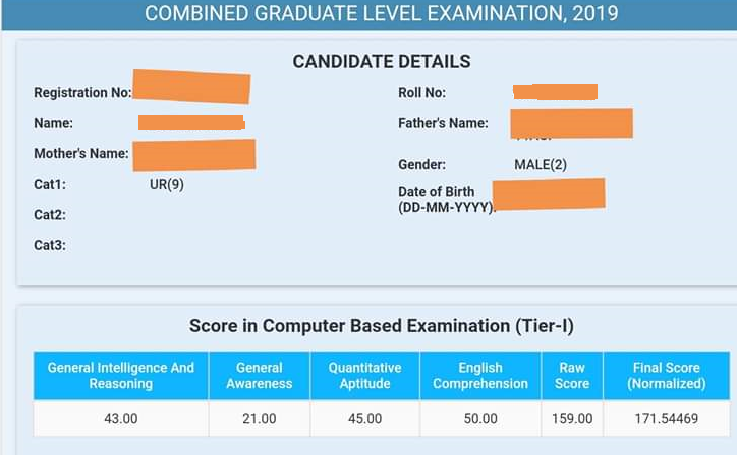 Change in SSC Score After Normalization 2018-19

Here are a few candidate’s scorecards from SSC CGL 2018 Exam Results. Go through below SSC CGL Scorecards and see the changes in the score after normalization. 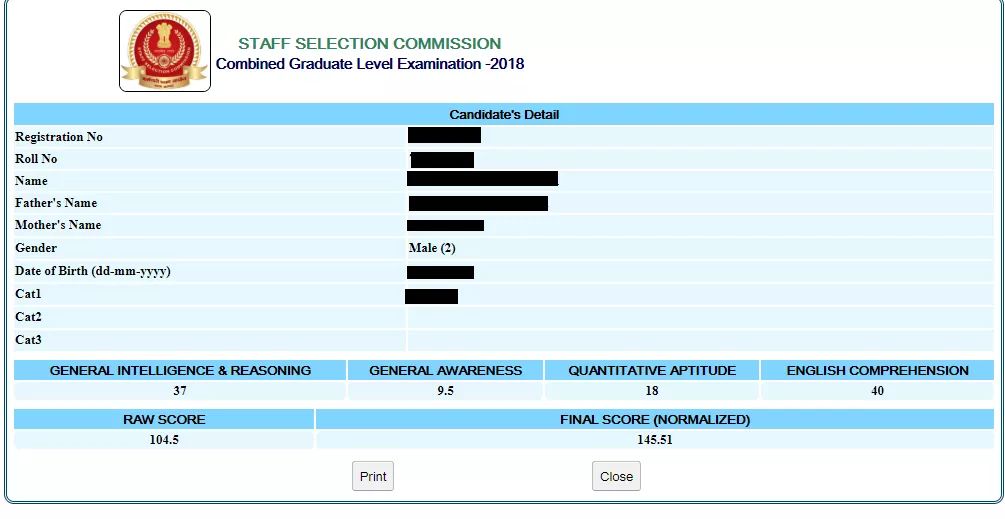 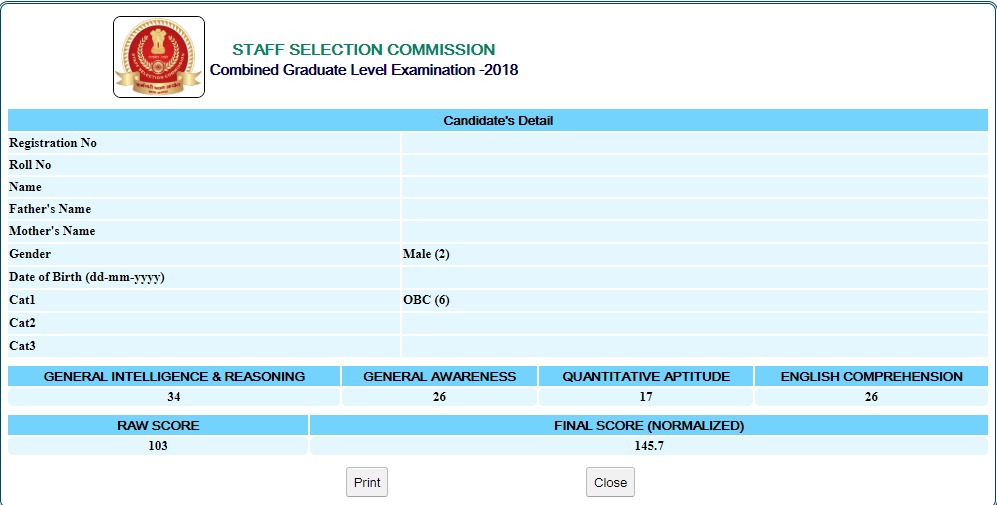 The difficulty level of question papers varies across different shifts. This helps to simplify the general of SSC CGL Result.

What is SSC Normalization?

Normalization is nothing but adjusting scores measured on different scales (difficulty level etc) to a common scale. It’s done to evaluate the performance of all the candidates on similar exam parameters i.e. It aims to adjust the difficulty level across different shifts of the exam.

Why is SSC Normalization Done?

The normalization is done following the fundamental assumption that in all multi-shifts examination, the distribution of abilities of candidates is same across all shifts.

This fundamental assumption holds true since the number of candidates appearing in the exam conducted by SSC is large and the allocation of shifts to the candidates is random.

How is SSC Normalization Done?

The scores calculated using the normalized formula can be corrected up to 5 places of decimal. Given below is the formula for calculation of final scores of candidates in SSC exam:

SSC announces the result on the official website in PDF format for different exams. The qualifying candidates can find their roll numbers in the PDF to check their results.

Given below are the steps to find SSC Result online:

SSC also releases a scorecard/mark sheet after the SSC Result announcement. Candidates can check their scores for each section and total marks obtained in the SSC Scorecard.

What is the Normalization in SSC CHSL 2020?
Normalization is a process to adjust values measured on different scales to a notionally common scale. It is done to evaluate the performance of the candidates on the basis of similar exam parameters and aims to adjust the difficulty level across different shifts of the exam

Does Accuracy matter in Normalization?
There is no such differential marking scheme based on accuracy. The normalized mark is based on – toppers marks, average marks, and standard deviation. So, the candidate’s final mark is all that matters.

How is Normalization Done?
Normalization is a process to adjust values measured on different scales to a notionally common scale. It is done to evaluate the performance of the candidates on the basis of similar exam parameters and aims to adjust the difficulty level across different shifts of the exam