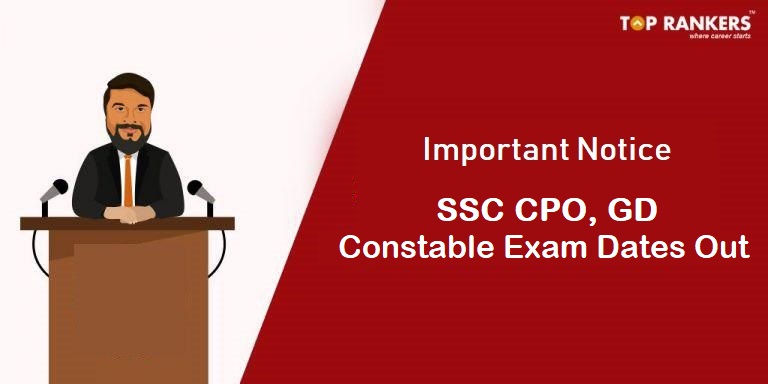 SSC had published an official notice regarding the revision of exam dates for SSC Stenographer, JHT and Selection Posts, GD constable and SSC CPO – SSC Notice. Now, according to the latest reports, there have been some important updates on the SSC calendar 2019.

SSC Notice on GD Constable and CPO Exam Dates Out

SSC has released a notice where the examination dates for SSC Stenographer, SSC JHT, SSC Selection Posts and SSC GD Constable have been revised. Applicants can check the examination dates in the Notice mentioned below. You can also check the exam changes If any, through the links provided below. According to the previous notice, only the exam dates for SSc Steno, JHT and Selection posts were announced. But now, SSC has also announced the dates for SSC GD Constable in NIA, CAPFs, SSF and Rifleman in Assam Rifles, along with SSC CPO as in SI in Delhi Police, CAPFs and ASI in CISF. Find the Details of the exam Dates given below and also read in details by clicking on the individual links.

According to a press release, all SSC exam aspirants are hereby notified that the commission has finally decided on the commencement of different exams. The news states that SSC will be firstly conducting the exams whose notifications have been released in the past 6 months. Therefore, the SSC Steno, JHT and Selection Posts exams will be conducted in the first half of 2019. Thereafter, SSC will be releasing notifications for SSC CGL and CPO exams. Most Probably, the SSC GD Constable exam will be conducted by the end of February 2019. Besides, it has also been said that the SSC Calendar for the year 2019-20 shall be released in the month of May 2019. Therefore, you all can start your preparations as soon as possible. Read the Newspaper Snapshot below: 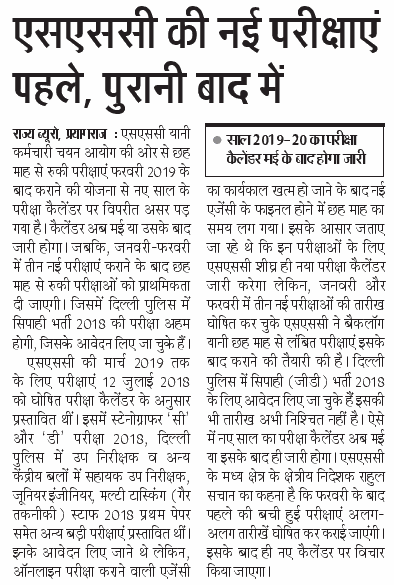 SSC Notice – SSC has released alatest notice on the vendor for Exam conduct of SSC. Besides, also know the Expected Dates for SSC CPO and SSC CGL 2018. Watch the Live Discussion Video.

Staff Selection Commission has released a notification regarding RFP for identification of Service Providers to conduct Computer Based Examination. SSC has published the Request for Proposal (RFP) on 17th Aug 2018. SSC has addressed the queries received from the bidders. Details of responses are at Annex-1 and the changes made to certain clauses of the RFP are reflected in the corrigendum given below. Bidders may refer to the Corrigendum along with the RFP. Find the official notice below.

Staff Selection Commission has released an announcement making some changes in the notice released on 5th May, 2018. The changes are done on Para 2.1. The change is on age limits regarding the post of Group B Inspector under Central Bureau of Narcotics. Previously the age limits for the post was 18 to 27 years. According to the latest amendment the upper age limit has been extended to 30 years.

You can find the detailed changes in the official notification attached below:

Read below to know the previous updates done by SSC.

The Staff Selection Commission has launched a new website with different look today. SSC has made the new website live today in its official notice. However the old website will also be accessible through a link provided in the new one.  Candidates applying for the Constable(GD) in CAPFs, NIA, SSF, Riflemen in Assam Rifles exam will be able to do one-time registration there itself as well as submit the online application for 2018 exam.

Have a look at the new SSC Official Website.

In this revised SSC Annual Calendar, you will find the list of all SSC exam dates. However, for most of the exams, the date is set to be notified later.

Since the CGL Tier 1 exam date has high chances of being postponed, it’s a good time to join a live class course for SSC CGL and make the most out of the available time.

Watch this video to know the reason of postponing the SSC CGL Tier I 2018 Exam. Also, you will get to know the exam dates of upcoming SSC Exams.

Do write us in the comment section how do you feel about the delaying of SSC CGL Tier I Exam. Also, tell us did you find our post on SSC Notice regarding revised exam calendar helpful? Then, keep visiting us regularly for more official updates. And do share your thoughts with us in the comments section below. ‘Cause your opinion matters!