SSC Multi Tasking Staff (MTS) hires individuals for several different government institutions, ministries & organizations. With the SSC MTS Recruitment, a candidate gets the opportunity to work as Group ‘C’ employees for the post of Peon, Waterman, Chowkidar, etc. Interested candidates who are eager to know about SSC MTS Salary can go through the complete post.

The candidates must refer below table to get some Highlights related to SSC MTS Pay Scale 2020:

There are different Posts are there in SSC MTS Notification. Candidates must be aware that the SSC MTS job is challenging and requires hard work. Let us have a look at the table below to know the different types of posts in SSC MTS.

As per the SSC MTS Salary after the 7th Pay Commission, there will be a considerable increase in the current salary which is mentioned with some important points below-

Let’s take a look at the new salary of SSC MTS after the 7th pay commission including the three groups of cities in the SSC salary chart are X cities, Y cities, and Z cities.

What is SSC MTS Salary for Other Posts?

Apart from the MTS salary, candidates are entitled to get many other perks and benefits as mentioned below.

Every year lakhs of students will appear for the exam due to the best SSC MTS Job Profile and salary. Some of the main points related to SSC MTC 2020 Work Profile are defined below-

This promotion rule is for every central govt employee. Educational qualifications etc as needed for further promotions. You can also be promoted through Limited Departmental Exam. 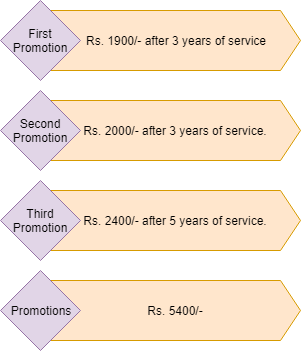 The States are divided by Region-Wise which are mentioned below-

There are 2 types of Increments are provided by the Government-

It must be noted that in order to clear the SSC MTS Exam, the candidates should do a thorough preparation with the right strategies and also solve SSC MTS Mock Tests as much as possible. It will increase their chances of scoring high in the exam. Moreover, candidates should make sure to be updated with the daily current affairs as it will help in cracking all kinds of competitive exams.

1. What are the duties and responsibilities of SSC MTS Job Holder?

The duties and responsibilities of the SSC MTS Job Holder are as follows-Physical Maintenance of records of the Section, General cleanliness & upkeep of the Section/Unit, Carrying of files & other papers within the building, Photocopying, sending of FAX, etc, Other non-clerical work in the Section/Unit, Assisting in routine office work like a diary, dispatch, etc., including on computer, Delivering of Courier(outside the building), Watch & ward duties, Opening & closing of rooms, Cleaning of rooms, Cleaning of building, fixtures, etcWork-related to his ITI qualifications, if it exists, Driving vehicles, if in possession of a valid driving license, Upkeep of parks, lawns, potted plants, etc.

2. What is the SSC MTS Salary In Hand?

3. What is the work profile of SSC MTS?

4. What annual increment does the SSC MTS get?