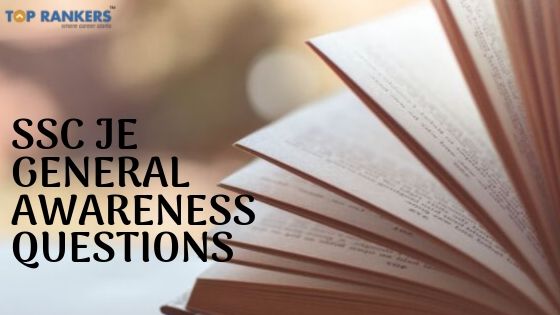 The Staff Selection Commission is conducting the Junior Engineer exam for filling in various posts under different branches like Civil, Electrical, and mechanical. As the SSC JE Exam is scheduled in the month of September, here are the SSC JE General Awareness Questions compiled by experts.

Enhance your preparation for SSC JE 20202 Exam by practicing various types of general Awareness questions and know their answers as well.

Here is the list of different GA Questions according to the latest SSC JE General Awareness Syllabus. Go through them and know different type of questions that can appear in the exam.

Q. Which is used as a primary memory of a computer?

Q. Chief Justices of the Supreme Court hold office till they attain the age of ______ .

Q. Pachmarhi biosphere reserve is in _____

Q. What is Cloud burst?

Q. The rice is cooked more quickly in a pressure cooker because

Ans: water boils at a higher temperature under pressure

Q. Wings of birds and insects are

Q. The Five Permanent Members of the UN Security Council Are

Q. Tulsidas wrote Ramcharitmanas in the reign of

Q. Which Indian State had the first woman Chief Minister?

Q. Who is the final authority to interpret the Constitution?

Q. In the long-run the fixed costs become

Q. Which of the following is the largest irrigation canal in India?

Q. The “Alamatti Dam” is constructed on which river?

Q. The lift of an air plane is based on which of the following?

Q. Which one of the following noble gas is not found in the atmosphere?

Q. What is the chemical name of Urea?

Q. The concept of Welfare State is included in which part of Indian Constitution?

Q. ‘Shekel’ is the currency of which country?

Q. The Vedic Deity ‘Indra’ was the God of:

Q. ‘International Day of Tolerance’ is observed on:

Q. ‘Utility’ in economics means the capacity to:

Q. Nobel Prizes are given in how many fields?

Q. The most important ore of Aluminium is:

Q. Who is the author of the Book ‘My Presidential Years’?

Q. Market Regulations in Medieval India were first introduced by:

Q. The term ’Butterfly Stroke’ is associated with which sport?

Q. Addition of excessive amounts of heat to a lake is referred to as:

Q. In the context of Computers, most common input devices are:

Q. ‘Vienna’ is the capital of which country?

Q. Which among the following is the longest river?

Q. Which is the largest coal producing state of India?

Q. In the context of Indian banking, abbreviation RTGS stands for:

Q. Tebhaga Movement of 1946 was initiated in:

Q. Which among the following countries is NOT a member of Nuclear Suppliers Group (NSG)?

Q. National Institute of Nutrition is located in which city?

Q. Which is the National Heritage Animal of India?

Apart from these questions, you can also attempt FREE SSC JE General Awareness Questions Quiz by clicking on the above link. Based on the latest exam pattern we have prepared the questions for enhancing the candidate’s preparation.