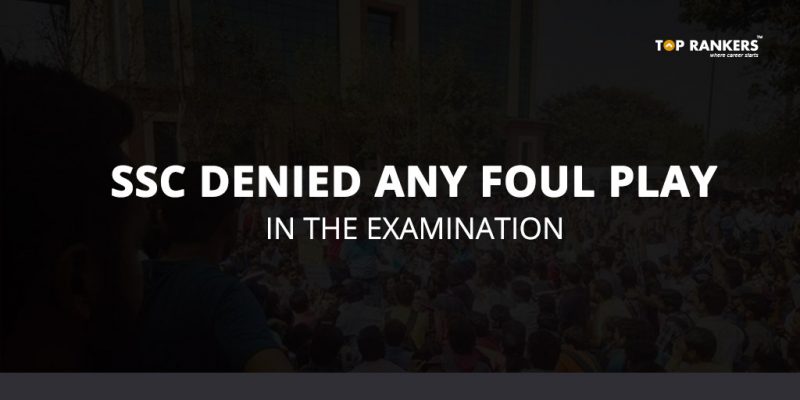 SSC denied foul play in the examination even after the long ongoing protest by the candidates from all across the nation. We are saddened by the fact that students are denied justice as the chairman of the SSC termed all the allegations ‘Baseless’. After playing the trick of 2-3 years long CBI Inquiry, SSC has now passed the ball to Department of Personnel and Training (DoPT). Chairman told that SSC can’t decide whether the inquiry should be done by CBI or SIT, and it will be decided by DoPT and SSC together as per the Notice. With so many evidences being circulated on social media, SSC just can’t keep on blaming coaching institutions while the Committee doesn’t have any evidence against them.

SSC is a prime Institution of India, which recruits students every year for various posts from all over the nation but from past few years, Students have lost their faith in SSC. SSC is not able to conduct fair Examinations for a while now. Few culprits from the committee are challenging the system every year with their unwanted activities. Well, the system needs to find a way to help all those students in a fair manner.

Students are furious of yet another disappointment in SSC Selections. Our team at Toprankers talked and tried to understand various aspirants and stood along to shout loud against the those who are challenging the system time & again. Aspirants started their march for a silent protest in big numbers in-front of the SSC headquarter in New Delhi from 27th February and its still going as the government is not able to take any appropriate action.

A candidate named Raju from Bhopal sadly confessed that “It’s been 4 years since I am writing these exams but every time some nonsense happens and students like us are denied the job not because of our proficiency rather it happens because of the System’s deficiency. ”

Another Aspirant named Sonal Aggarwal  from Allahabad said that ” I am a 28 years old unmarried girl, whose future depends on the SSC recruitment but I have lost faith in this system, where the government is not able to provide justice even after knowing the subject. My parents do not have enough money for my marriage but I had a hope that I will make everything alright but now I am hopeless with the system turning to be cruel against our lives. I am deeply concerned by the influence of corruption in our society”

Well, Its turning out to be a disaster for an institution so very important in a country of more than a billion people. I want to ask some questions to SSC. UPSC is still conducting offline exams, why doesn’t the paper get leaked ? Why is it with SSC that every year there needs to be a re-exam? Why doesn’t it happen with IBPS exams? How can IBPS conduct exams year after year so efficiently? SSC must consider students’ request for a fair system and examination. Now only the time can tell if the things are going to change or it will remain the same but we at Toprankers are committed to raise our voice against the corruption in SSC and will fight for the rights of Students.

Accordingly, evidence was submitted in the form of SSC CGLE Tier 2 question printouts at 6 PM on 28th February 2018. However, saying that those weren’t concrete evidence, the Commission asked them to provide the same by 10:30 AM on 1st March 2018. The notice was released on the official website today. And you can see the same below.

Stay tuned for Examination related information, tips and strategies. If you have any query or suggestion, Do write us in he comments below.