The Staff Selection Commission is going to conduct the CHSL Tier 1 exam from 12 October to 26 October 2o20. It is important for candidates who are appearing for the exam to know about the SSC CHSL Shift Timings 2020. Here, we have provided reporting time, exam time, and many other details related to the exam. 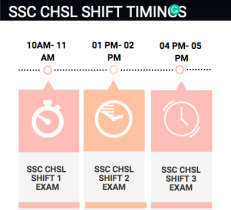 Let us have a look at the table below to know all the important events related to the Tier 1 exam of Combined Higher Secondary Level examination.

In order to have a hassle-free paper, follow these important instructions specified by the Staff Selection Commission. The SSC is very particular about discipline inside the exam hall.

As per the experts, the Last-minute SSC CHSL Tips can help guide you through important tricks and strategies for preparation when few days left for the exam.

The Staff Selection Commission will release the answer key after one month of the completion of the Tier 1 exam. The answer key will be released in the form of a PDF on the official website.