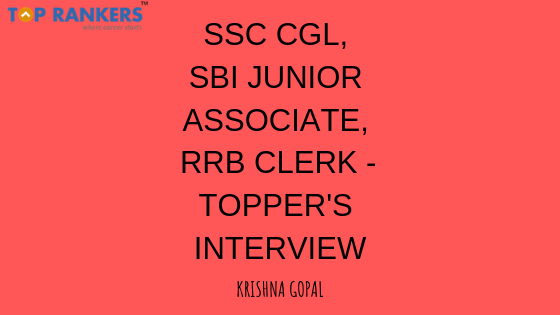 The present era is highly competitive. There is always a race going on where everyone wants to be a winner. But, only a few make it to the end. Same with the competitive examinations which never go out of trends

Every year millions of students write Government Exams in order to acquire the value and prestige that the jobs provide.

Just like that, our one of the Test Series Purchasers Krishna Gopal has successfully cracked SSC CGL as well as IBPS PO exams. The following is the detailed topper’s interview we had with him. All candidates who want to crack exams just like Krishna Gopal did, must read the entire interview.

The following question-answer session is a must read for the people who want to crack the exam:

Q. Which entrance exams did you appear for? Which ones did you clear?

A. I have cleared SBI Junior Associate exam, RRB Clerk and Po Exams.

Q. Which education background do you belong to?

A. I am a Science student. I have completed my Bachelors in Science. I always wanted to go for government exams and so I did.

Q. For each of the exam. when did you begin your preparation?

A. I started my preparation in February 2018, I started with the preparation of SSC CPO exam, at that time I was lagging back in CGL Mains just from 6 marks. Also, I started preparing for the SBI Junior Associate exam. While preparing for SBI, I was being able to select in RRB Clerk and PO as well

Q. What were the challenges that you faced during the preparation and how did you overcome them?

A. There were many challenges so far. First of all, when I gave the CGL exam in the beginning, I couldn’t clear it. I purchased a test series from the market which did not have very difficult questions and I believe that it was the reason I could not crack the exam. After that, I planned to buy TopRankers Test Series because of the quality the questions had. I like that the questions were tough which helped me a lot. I wanted tough questions and because of practising TopRankers Test Series, I got selected in the exam.

Q. Were there any other strategies you used to crack the exams?

A. I gave as many Mock Tests I could because I was seeing my improvement after the attempts. I tried Topic Tests as well but they didn’t help me. Solving Mock Tests covered all my topics at once which was very beneficial in cracking the exam

Q. Did you have any Study Plan?

A. I used to study 8-10 hours a day. I have spent most of my preparation time-solving TopRankers Mock Test series. I did not make any particular study plan.

Q. What tips and tricks would you like to give to the other students who are preparing and planning to crack Govt. exams?

A. The only thing I would like to say is that be persistent, spend more time to what you want. In my case, I have failed many times but I never stopped or gave up on what I wanted to achieve. I reduced my sleeping time as well. I slept only 5 hours a day because I really wanted to get through this.

Another thing, we must keep revising the questions and not leave it by reading just once.

A. I believe in Self study. Solving more and more mock tests have personally helped me a lot. No matter where one takes coaching from, in the end, only we have to work on our weak areas. So, self-study is the best path to cracking any exam.

Q. Any resources you have used to crack exams?

A. I would only mention TopRankers mock test series. I purchased one year Mock Test series form TopRankers and it has helped me tremendously.

Q. How many hours have you devoted per day to study?

A. I had spent almost the entire time on my preparation. I had hardly had any sleep especially when the exam came near. I used to wake up and start studying right away. I used to sleep at 3-4 in the morning and wake up by 5-6 when there were only 2 weeks left in the exam

Q. How was Toprankers Test Series helpful to you?

A. The best thing about Toprankers Test Series was the difficulty level was high. If the tests were easy, I would never be able to understand my own weak areas which I needed to polish. I personally think everyone must buy Toprankers Test Series because, for me, I give a lot of credit to them for enabling me to crack the exam.

How to Score 40+ in SSC CGL Reasoning

Q. Can you share your experience on a difficulty level of the exams you have given?

A. I would honestly tell that the exams were really easy and especially if I compare it with the Toprankers Test Series. The series I bought from Toprankers were more difficult than the questions which appeared in the exam which was one plus point I would appreciate the most.

Q. Would you please share some tips and suggestions for the students who are preparing or aspiring to clear the govt. exams you have appeared for?

How To Prepare SSC CGL Without Coaching

A. I would just tell that no one should ever stop working on their goal. They must be persistent enough to reach their final destination. Even if seems difficult, I would just say keep working on it. That is the key! 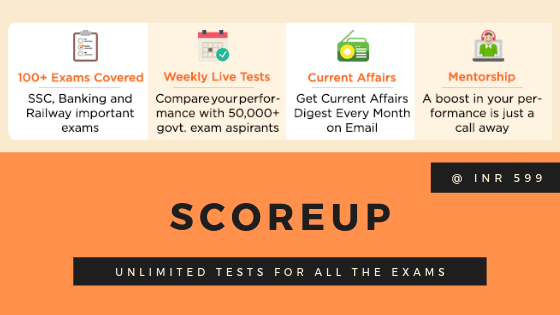