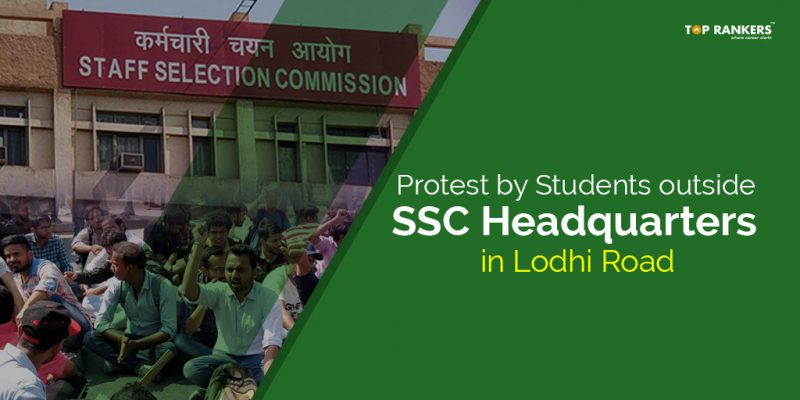 Peaceful Protest by Students from Feb 27th, 2018 near SSC Headquarters – Protest regarding discrepancies in the Recruitment process

On 3rd March 2018: Today is the 5th Day of the Protest against SSC. Last four days have seen a tremendous protest against SSC. Now is the time for students grievances to be heard. The SSC has issued a clarification on the regard and said an independent inquiry will be conducted into the various exam malpractices that have been happening that led to the cancellation of the SSC Exam on 21st Feb 2018. Various media organizations and politicians have voiced their concerns regarding the various problems that candidates of SSC are facing. The intent of the protest is to reduce cheating in the examination.

Sign the petition and voice your concerns regarding the SSC Scam via the link given below. Help us reach 2,50,000 signatures and make the government take notice of the demands.

Time has come for some transparency in the exams. Frequent paper leaks, cheating cases in exams are creating problems for students. The Recent protest by Students of Delhi shows that there is a rising discontent among students regarding incidents of cheating. Students want a fair examination process without involvement of criminals in the examination system. Governmental reforms regarding education are the need of the hour. Since Delhi is the Political capital of the country most political movements culminate here. Even during independence, several freedom movements happened in Delhi. Now, the SSC protests have reached their tipping point and government must take necessary steps.

March 4th, 2018: The SSC CGL Protests are ongoing. As of today, Government has accepted demands of various organizations and there is going to be a CBI Probe into the various cheating cases. The government has accepted CBI probe into the issue. There will be no stay on the SSC Examinations. There is likely to be a change in the Vendors in SSC Examinations along with a thorough audit of existing and new vendors. The SSC has officially released a notice regarding CBI probe into SSC CGL Tier II Exams that were conducted from 17th 22nd February 2018.

March 3rd, 2018: The Protests have intensified and Anna Hazare is expected to join the protest. Anna Hazare was part of India Against Corruption Movement in 2011 that gave impetus to a corruption free society. Encouragement from a national figure like Anna Hazare is bound to help the protest and help highlight the problems of the students.

On 28th Feb 2018: This is the Day 2 of Protest against Irregularities in SSC. Several Students have faced problems in the recruitment process with SSC. SSC released mark sheets after a long time. It seems that they have no time limit to release the mark sheets. SSC is unable to conduct an exam that is free from cheating cases. Yesterday, the protest held in Lodhi Road outside SSC headquarters found a gathering of protesters in large numbers. Today, a turnout of a large number of protesters is expected. The aim of the protesters is to demand a fair recruitment process from SSC. The protest is going on since yesterday and went on overnight. Today is the last day of Protest. Police have reportedly abused the protestors in the course of the two-day protest.

For live coverage of the event and fresh updates, stay connected with social pages of Toprankers:

On 27th Feb 2018, several  Jobs aspirants gathered for a massive agitation against SSC at the SSC headquarters in New Delhi.  After staging a protest at CGO complex, the protesters will march towards Department of Personnel and Training.

The Students or Protesters have raised several issues and demands that they want the government to meet:

The protesters want corrective action in SSC that has been steadily delaying the recruitment process and not giving jobs to selected candidates.

Through Peaceful Protest by Students on Feb 27th 2018 near SSC Headquarters Qualified candidates are demanding a fair recruitment process.

On January 22 2018, About 300-350 students made a peaceful protest against SSC for not giving them jobs despite selection. About 10, 661 candidates have qualified in the SSC CGL 2016 Exam. However, most of them are yet to get jobs and appointment letters. The entire process of recruitment has been futile as it has yielded nothing for these candidates who have spent their time and energy in clearing the exams. The Final merit list for SSC CGL 2016 was released in 2017 and since then none of the candidates. Several students from SSC CGL 2015 batch and SSC CGL 2017 batch were also part of the protest.The reason could be partly owing to the economic crisis that the country is going through. However, not giving jobs that were promised to candidates who went through a rigorous recruitment process is certainly unjustified.

The SSC CGL 2016 was held in June 2016 and the complete merit list was declared on August 5th 2017 after several court cases. Several candidates who have been placed in various government departments still wait for their jobs despite being part of the merit list. These students have cleared all exams.

Such a case of promised jobs not being given to candidates can be seen in case of some large MNC’s who were unable to give jobs to IIM graduates who were selected as part of campus recruitment process partly owing to the economic slowdown that happened in 2016. Following the failed recruitment process, these companies or MNC’s were blacklisted from IIM as they could not allow jobs to candidates selected for campus recruitment.

The results were declared in October last year, but owing to a technical glitch the commission released final answer keys that were found to be incorrect. The event led to the lowering of the cutoff marks and eventually to the reduction of marks according to a report that appeared in Hindustan Times.

Several Candidates are dissatisfied with the performance of the Staff Selection Commission and the lengthy recruitment process that goes on for a long time. The SSC Recruitment process is fraught with several imperfections like frequent postponement of exams, cancellations, technical glitches, paper leakages, delay in appointment of candidates despite selection. All SSC candidates are extremely unhappy with such incidences.

In the last few years, unemployment in our country has been at a high. Government is unable to create jobs for the youth either in private sector as well in the PSU’s.

We hope that government addresses the grievances of the SSC aspirants. 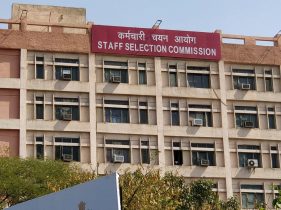 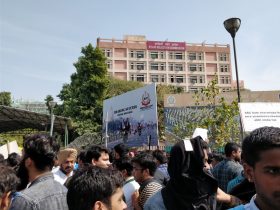 1 thought on “Peaceful Protest by Students outside SSC Headquarters”