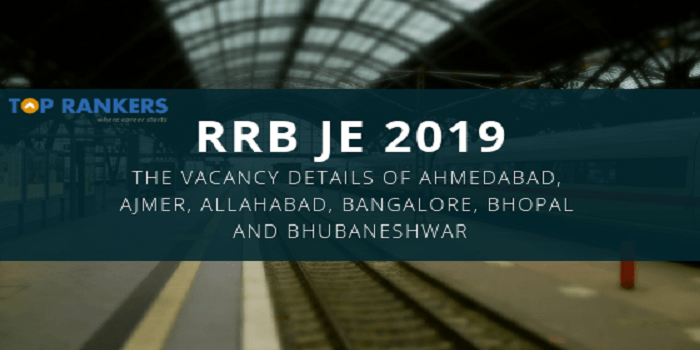 This post will take you through RRB JE Vacancy Details for Junior Engineer (JE). RRB JE 2019 Tier 1 exam was conducted from may 22nd to june 5th 2019. RRB has released official notification for revised vacancies on 26th July 2019.

* 23 total vacancies have been cancelled for Chennai, Mumbai & Secunderabad.

Railway recruitment board has released 13487 vacancies for RRB JE across the nation. This is a great opportunity for all the aspirants looking to be a part of Indian Railway.

The below-mentioned table shows in detail vacancy for RRB Ahmedabad;

RRB Ajmer has total 825 vacant seats for the Junior Engineer (JE) Exam. The table below clarifies all details about the RRB Ajmer Vacancies.

RRB Allahabad has a proficient number of vacant seats of JE Exam. The number is 1,446. The following table has all important vacancy details.

The RRB Junior Engineer exam has 708 total seats in Bangalore area. Below is the table that explains everything.

RRB Bhubaneshwar has a total of 242 vacant seats for the Junior Engineer (JE)Exam. Following has complete Vacancy Details of RRB JE Exam.