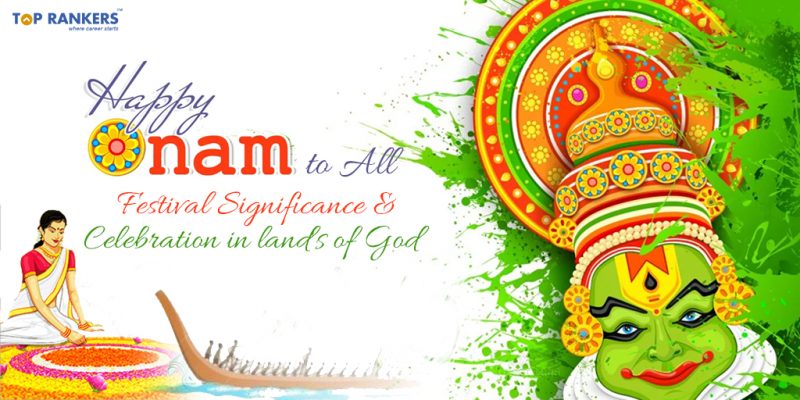 Kerala is referred as the Land of Gods because it hosts many holy temples and cities which are some of Hinduism’s most spiritual and auspicious places of pilgrimage and worship. Onam is the biggest and the most important festival of the state of Kerala. It is considered the state’s harvest festival, ‘Onam’ falls in the beginning of Chingam, the first month of Malayalam Calendar. Onam is celebrated with joy and enthusiasm in all over the state and also by people of all communities. According to a popular legend, the festival is celebrated to welcome King Mahabali, whose spirit is said to visit Kerala at the time of Onam Festival.

The festival of Onam is dedicated to the King Mahabali who though was an Asur (one with negative thoughts in his mind) by birth but was a Sur (one with more positive thoughts in his mind) by virtue. It is said that Kerala witnessed its golden era during the rule of King Mahabali. He was the most acclaimed king ever. None of the needy ever returned empty handed from his door. The myth of King Mahabali says that the king sacrificed himself along with every thing else he had in order to stand true to his words. Thus as a reward for his sacrifice he was blessed to be remembered by the people of Kerala and all his followers for eternity in the form of Onam festival. Carnival of Onam lasts for ten days and brings out the best of Kerala culture and tradition. Intricately decorated Pookalam, luscious Onasadya, breathtaking Snake Boat Race and exotic Kaikottikali dance are some of the most remarkable features of Onam – the harvest festival in Kerala.

Rich cultural heritage of Kerala comes out in its best form and spirit during the ten day long festival. It is indeed a treat to be a part of the grand carnival. People of Kerala make elaborate preparations to celebrate it in the best possible manner. Elaborate feasts, folk songs, elegant dances and energetic games are the phenomenal features which makes it a annual festival. Fancy, lavish feasts of ‘Onam sadya,’ with at least 10-15 side dishes, are served in houses, with the feast ending with delicious payasam, which ensures that the message of oneness and hope is spread far and wide.

Pookkalam refers to making designs with different types of flowers in front of the gate of house. With each passing day during the Onam festival, a new layer of flowers is added to the Pookalam. At some Pookalam competitions are held at some places.

This refers to all the games played at the festival of Onam. Talappanthukali which is game played with a ball is a favorite of men. They also indulge in Ambeyyal (archery). Women engage themselves in performing several traditional dances.

Also known as the snake boat race, this is one of the most entertaining events of the Onam festival. Near about 100 boatmen compete with each other in a boat riding competition .The boats are decorated beautifully in different patterns. Men and women from across the city come to witness this race.

The elephant procession is one of the most awaited events of Onam. The majestic animal is decorated with flowers, ornaments in gold and other metals. The elephant is made to take a round of whole Thrissur where this procession is held. The elephant dances and interacts with people through small gestures.

The major attraction of the festival includes the folk dances performed by women. Kaikottikali is a clap dance performed on the occasion of Onam. Women performing the dance sing praises of King Mahabali. Women also perform a dance in a circle. This dance form is called Thumbi Thullal. Kaikotti kali and Thumbi Thullal are two graceful dances performed by women on Onam. Folk performances like Kummatti kali and Pulikali add to the zest of celebrations.

Due to floods, there have been several cancellations for ‘Onam-sadya’ as well. Various Malayali associations are cancelled their Onam celebration plans to respect the victims of the Kerala floods. The associations are working towards providing relief funds and are planning to contribute `5 lakh to `10 lakh to the CM’s relief fund. Millions of people are still in relief camps in Kerala, as their homes devastated by the savage monsoon that has claimed 237 lives since August 8, ‘Onam’ is going to be a subdued affair this year in the state.

The culturally rich country- India, has always been a hub for festivities. Every day there is a festival and people celebrate it with much enthusiasm but few festivals make you excited for their arrival. Onam is one must-see festival of Kerala and I am sure you would love to experience this grand celebration once or even twice or many times.