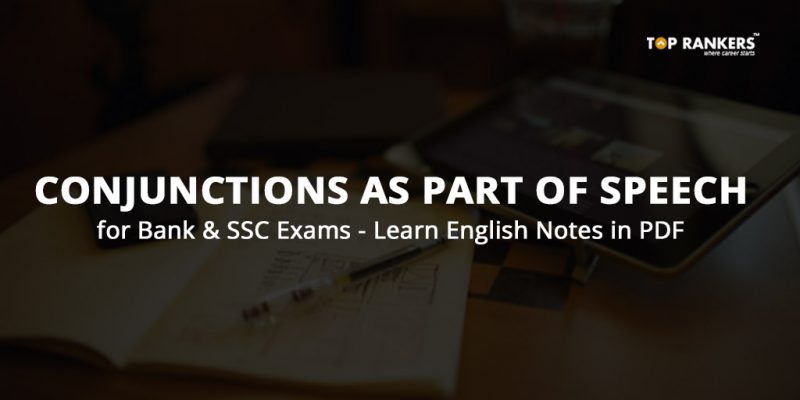 English Section is an integral Part of all banking and SSC Exams. Nouns are an important part of Grammar and it plays a vital role in shaping the overall performance. Grammar is an essential part of English and an exam. In order to crack any Banking and SSC Exam, you need to know your grammar well and if not it can be detrimental for you to crack the exam.

Conjunctions as Part of Speech for Bank & SSC Exams

The most significant part of English Grammar:

The Eight Parts of Speech

Out of the eight Parts of Speech, we look at conjunctions as one of the most important parts of speech of English Language.

What is a Conjunction?

Unlike Nouns or verbs, Conjunctions are limited in number and connect millions of sentences in the English language. They act as great connectors of words or sentences and make communication easier. They also break sentences wherever required.

The conjunctions are as follows : and, but, or, for, nor, so, yet, because, if, whether, lest, unless, as, since, how, when, where, while, why, till, until, after, before, however, as soon as, though and than.

One word to another word:
– Ramesh and Suresh are brothers. (noun to noun)
–Suresh and you have done this work. (Noun to pronoun)
–You and I will go there. (Pronoun to pronoun)
–Suresh sat down and wept. (verb to verb)
–Suresh is sad but hopeful. (adjective to adjective)
–Suresh moves slowly but silently. (Adverb to adverb)
– The bird flies through and through the sky. (preposition to preposition)

One word to another clause:
– Suresh is so weak that he cannot walk.
–She was so beautiful that everybody loved her.

One sentence to another sentence:
– I trust Suresh because he is honest.
–Suresh says that he will do it.
– They will come if they are allowed here.
– It‘s been a long time since I saw you first.
– You must wait here until your father comes back.
– I wish to know whether he will turn up or not.

Conjunctions as Part of Speech for Bank & SSC Exams

There are three different types of conjunctions:

Coordinate conjunctions such as and, but, or, nor, for, so, or yet are used to connect or join individual words, phrases and independent clauses.

Example:
– He wont give up until he wins
–Since he had the headache, he went to sleep
–Though he loved her cousin, he married another woman.
–Despite calling several times, her call was not returned.

Correlative conjunctions are pairs of conjunctions such as both…and, either…..or, neither……nor etc. They are used in the sentences to link words, phrases and clauses.

Example:
– He is both foolish and naive. (noun to noun)
– She is both wise and good. (adjective to adjective)
– He must either work or leave. (verb to verb)
– He behaved neither wisely nor kindly. (adverb to adverb)
– He is so tired that he cannot walk.

1. Incorrect –Neither Kritika nor Suhasini were wearing spectacles

Correct – Neither Kritika nor Suhasini was wearing spectacles.

2. Incorrect – Neither Ramesh nor Suresh made their presence felt.

Correct – Neither Ramesh nor Suresh made his presence felt.

Tips to Learn Grammar: Conjunctions as Part of Speech for Bank & SSC Exams

1. Be a Good Listener: Be a good listener to those who can speak English well. Consume English Media like English News channels, read English newspapers, books, and novels.

2. Learn Parts of Speech: The only way you can become an expert in English is to learn parts of speech mentioned in this blog.

3. Read Comic books and Short story books: Read English comic books like Tinkle, TinTin, or other Comic books from Amar Chitra Katha where you can improve language by reading on Indian mythology. Read Short stories that give you an opportunity to learn English and grammar.

5. Stay Confident: Stay confident and believe that you will be able to learn and improve English Grammar.