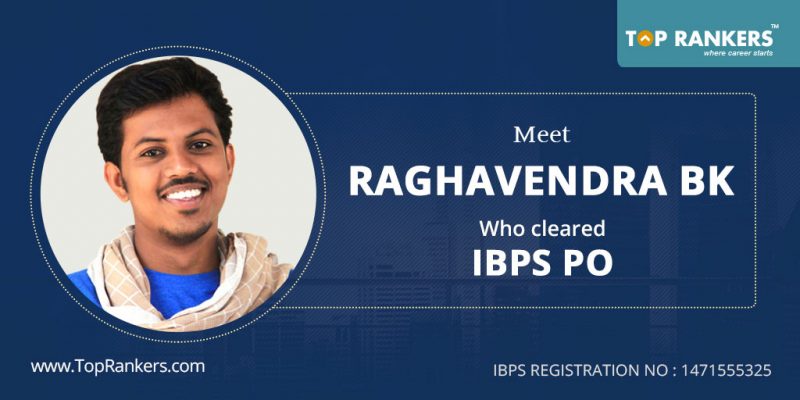 IBPS PO Success Story – It is fine to celebrate success, but it is more important to learn lessons from failure. Success doesn’t come overnight, rather it comes to an individual after sheer hard work and dedication. Every year, lakhs of aspirants appear for multiple exams but a few who are determined enough clear them. You don’t have to be a genius to surpass anything. All you need to do is put in the right efforts and in the right direction.

Raghavendra BK, IBPS REGISTRATION NO: 1471555325 from Bangalore cleared IBPS PO exam by flying colours. Raghavendra started his journey with a vision, worked hard for it and ended up with ultimate success.

Here is the complete story which will take you through Raghevandra BK success journey :

What made you choose banking as a career?

I choose banking as my career because a job in banking sector is promising in nature. Moreover, one can find ample of opportunities in banking sector. The growth offered is the major attraction in which a candidate joins as a probationary officer and gets promoted to branch manager and finally general manager. One can also get job security which I feel is a very crucial aspect related to a job.

What are the exams you have cleared this year?

I have attempted all total three exams which are IBPS PO, IBPS RRB and RRB NTPC. I have cleared the IBPS PO prelims and have also cleared IBPS RRB Prelims. But, I was clear about me taking up IBPS PO and didn’t pay interest to proceed with IBPS RRB. Meanwhile, I am also waiting for RRB NTPC result and excited for it.

How many times have you attempted these exams?

This was my first attempt. All of these exams I have attempted for the first time and I got through very well.

What was your preparation plan- both overall and sectional strategies?

I started being familiar with the exam pattern. I started figuring out what are the sections asked in the exam and what are the type of questions. My approach was to make the best out of the least number of inputs. My approach was to pick up the easy questions and less time consuming. This made me solve maximum questions in the exam. English was my strength so my goal was to solve maximum questions in English and solve as many questions as I could in Quant and Reasoning.

How many Mock Tests have you attempted for clearing these exams?

I have attempted a lot of test series. I have attempted around 10 IBPS PO mock tests and around 20- 30 around mains. Irrelevant of the number, I used to analyse my performance after every mock test and work hard on how better I could perform further.

Which test-series did you practice with to excel in your efforts?

I started my practice with test package offered by TopRankers both for prelims and mains. Especially for my prelims exam, I got a lot of benefits from the sure shot test series. The sure shot package had the exact pattern asked in the prelims exam and that helped me easily clear my exam.
How was your experience taking up the mock tests & what similarity you found between test-series and the actual exam?

The best thing I could find is the resemblance of the pattern. The pattern was about 60 – 70 percent similar with the pattern of the real exam which was very helpful for me to clear the exam.

Any piece of advice for other students appearing for bank exams?

Each examination you appear is similar to opening a bank account. More are the investments, more are the benefits gained is the conventional idea everywhere. But I would advise them to keep an eye on the exam pattern changing every now and then and focus on ‘smart preparation’.

“All our dreams can come true if we have the courage to pursue them.”- Walt Disney

Kudos to Raghavendra! We wish him loads of good luck for his future plans.

We have mentioned all the eminent information of IBPS PO. We are sure that you are working hard to clear the IBPS PO Examination, and hence, we are confident that your efforts will also be rewarded. Just keep going!