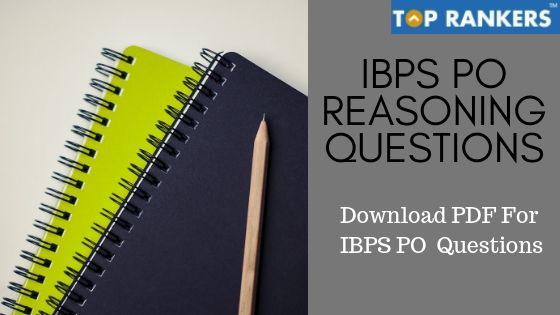 Institute of Banking Personnel Selection has released the official IBPS PO 2019 Notification & the application process has begun. With Lakhs of aspirants appearing for the IBPS Bank PO exam every year, the competition level remains high. This post will cover IBPS PO Reasoning Questions for the Prelims & Mains Exam. Go through all Reasoning Aptitude Questions that can be asked in the exam.

The Reasoning Section is present in both the Prelims & Mains Examination. Download the IBPS PO Reasoning Questions PDF for preparation.

The Important Topics in the Reasoning Section of the IBPS Bank PO Exam are:

Attempt the IBPS PO GA Questions that have been listed below

Direction (1-5): Study the following information carefully to answer the given questions.

In a certain code language:

Q1. What will be the code of Business?

Q2. What will be the code of “World and India”?

Q3. What will be the code of the “Nobel Prize”?

Q4. What will be the code of “Previous Year”?

Directions (6-10): Study the following information carefully and answer the given questions.

A word and number arrangement machine when given an input line of words and numbers rearranges them following a particular rule in each step. The following is an illustration of input and rearrangement.

And step V is the last step of the arrangement. As per the above rule followed in the above steps, find out in each of the following questions the appropriate step for the input given below;

Q6. How many steps would be needed to complete the arrangement?

Q7. Which Step number would be the following output?

Q8. Which of the following would be the step I?

Q9. In step V, which of the following word/number would be on the 6th position (from the right)?

Q10. Which of the following would be the final arrangement?

Directions (11-15): Study the information carefully and answer the questions given below.

In a certain code language:

Q11. What is the code for ‘Assignment’ in the given code language?

Q13. What is the code for ‘Horizontal’ in the given code language?

Q15. What are the code for ‘Need Optimal Arrangement’ in the given code language?

*Now that we have covered IBPS PO GA Questions for Mains, also go through IBPS PO Preparation Tips for all subjects.