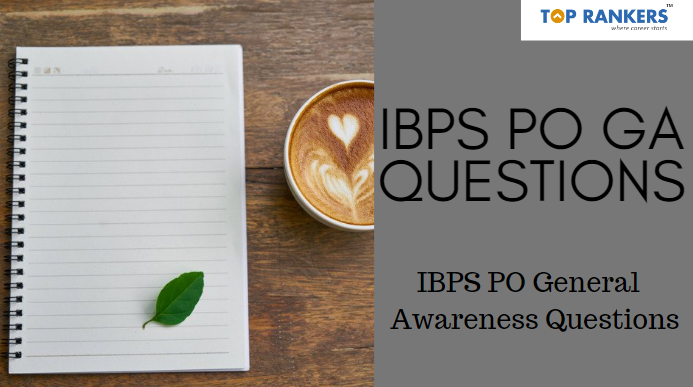 Institute of Banking Personnel Selection has released the official IBPS PO 2019 Notification & the application process has begun. With Lakhs of aspirants appearing for the IBPS Bank PO exam every year, the competition level remains high. This post will cover IBPS PO GA Questions for the Mains Exam. Go through all General Awareness Questions that can be asked in the exam.

The General Awareness section is present in the Mains Exam but it is essential for candidates to start their preparation beforehand. Due to the huge scope of topics that GA covers, going through Current Affairs & latest Banking news regularly is the key to clearing the test. Go through the IBPS PO GA Questions to get an idea about the difficulty level of the exam and type of questions asked.

The Important Topics in the General Awareness section of the IBPS Bank PO Exam are:

Important questions for IBPS PO GA Questions have been listed below

Q.Who has won the CEAT International Cricketer of the Year Award?

Q.Which railway had come up with an innovative solution to keep the elephants away from the railway tracks?

Q.What is the theme of World happiness day 2019?

Answer: Share Happiness and be a part of Something Amazing

Q. __________ is a three-year road map for medium-term objective to be achieved for improving regulation, supervision of the RBI.

Q.Name the Captain, who becomes the world’s first woman to cross the Atlantic Ocean solo in a Light Sports Aircraft (LSA)?

Q.Which bank has been identified as number 1 bank by customers in India, as per Forbes World’s Best Bank survey?

Q.Deposits in Jan Dhan accounts have crossed how much mark?

Q.Pinaka is a multiple rocket launcher produced in India and developed by-?

Q.Which company has partnered with The Ministry of Housing and Urban Affairs (MoHUA) to deploy Project Sangam?

Q.In union budget 2019-20, Railways has received a budgetary allocation of-?

Q.The Government of India, the Government of Kerala and the __________ signed a Loan Agreement of USD 250 million for the First Resilient Kerala Program to enhance the State’s resilience against the impacts of natural disasters and climate change.

Q.How much fund allocation for public sector banks in budget 2019-20?

Q.Abhijeet Gupta is related to which sports?

Q.Who becomes only the second Indian sprinter to win a gold in a global event in Italy?

Q.The Reserve Bank of India has constituted a six-member committee on the Development of Housing Finance Securitisation Market to review the existing state of mortgage securitization in India. The committee will be headed by-?

Q.____________ and Commonwealth Bank of Australia (CBA) was the organizer and the main buyer of the issue of the “Bondi” bond, short for Blockchain Offered New Debt Instrument, with a 2-year maturity term.
Answer: World Bank

Q.New Space India Limited (NSIL) which will serve as the commercial arm of-?
Answer: ISRO

Q.A Centre for Disability Sports will be set up in-
Answer: Madhya Pradesh

Q.Receivables Exchange of India Ltd (RXIL) was incorporated on 25th February 2016 as a joint venture between-?
Answer: SIDBI

Q.The government has set up an 18-member working group for the revision of the current series of Wholesale Price Index. This committee under Chairmanship of-?
Answer: Ramesh Chand

Q.The lenders of Essar Steel have told the Supreme Court that the NCLAT has misconstrued and misinterpreted the provisions of the Insolvency and Bankruptcy Code (IBC) to such an extent that the statute itself has been literally rewritten. What is the full form of NCLAT?
Answer: National Company Law Appellate Tribunal

Q.Who has been appointed as an additional director on the board of Yes Bank?
Answer: R Gandhi

Q.The report’s Gender Gap Index ranks countries according to the calculated gender gap between women and men in four key areas. Which area is not them?
Answer: Environment

Q.Which company has announced the launch of its new Wings application in India on Google Play Store?
Answer: BSNL

*We will keep updating the IBPS PO GA Questions as the Mains Exam draws close.

*Now that we have covered IBPS PO GA Questions for Mains, also go through IBPS PO Preparation Tips for all subjects.